It is sometimes hard for children to see how global their work can spread. Throwing numbers around doesn’t always enthuse the children to carry on blogging. Over the past week I have tried a little experiment to try and give the children a visual picture of the global audience available through sharing work online.

Just over a week ago, two classes from my school made their own versions of the latest internet meme – Harlem Shake. Here was our effort:

As much as the children loved making the video, there was a real purpose to it. Youtube provides in depth analysis of all the views the video recieves, from the demographics to the gender and platform used to watch it. I wanted to use these statistics to inspire the children to see how global our audience can be and further prove the benefits of blogging to showcase their writing.

First I downloaded the report from YouTube showing all the countries and the amount of views (3500 in a week.)

I then provided the children with a blank world map: 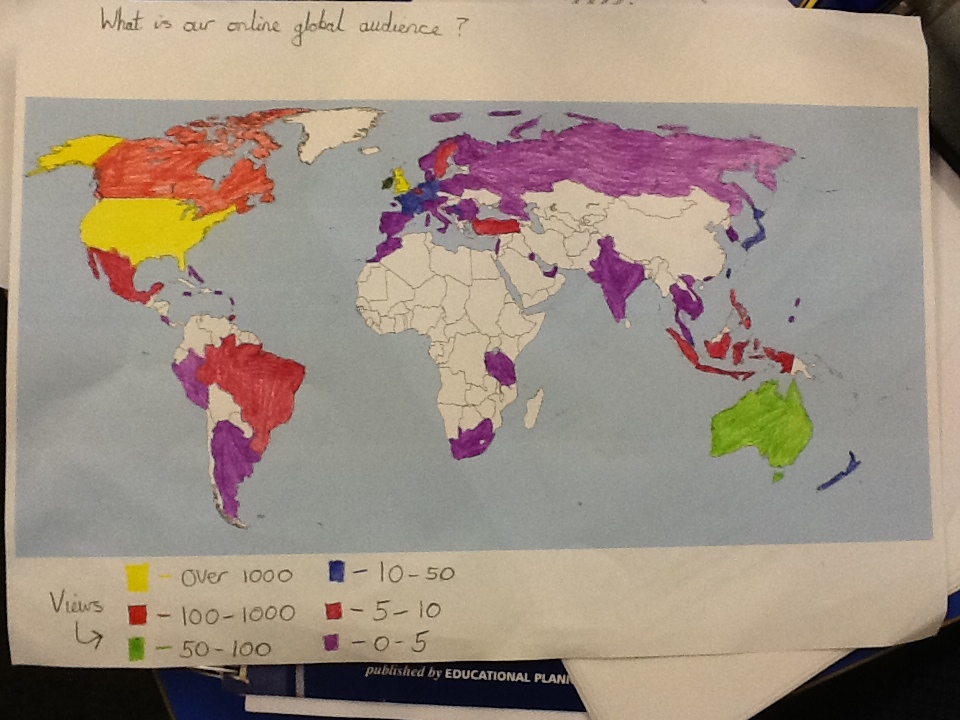 They were amazed to see how far and wide the video had reached. It completely inspired them, knowing that this is the potential audience for their writing and other work. I finished with this thought for the class:

If this is how many people watched you dance for 30 seconds imagine how many would read a story? 100 word challenge? or more?

The finished maps gave the children a clear visual picture to back up all my discussions about the potential of blogging. They were able to clearly see how much of the world saw our school! I am hoping this will then encourage the children to blog even more knowing their work can be read by thousands of people.

Most blogs have tools that will show maps of where visitors have come from, Clustrmaps for example. I chose to use the video as I hoped it would be able to give us a quick and concise picture of the potential audience by using a popular and current trend. The idea was to inspire the children to blog and I believe it has definitely served that purpose well. It also provided the children with a great opportunity to learn about different countries around the world.

Since beginning the iPad journey in our school, I have been dying to use some of the Augmented Reality apps available on the iPad. I didn’t want to dive in and use it with no substance I wanted to make sure there was real potential to enhance the learning in the classroom.

For those people who are not familiar with the term “Augmented Reality,” here is a web definition:

“Augmented reality (AR) is a live, direct or indirect, view of a physical, real-world environment whose elements are augmented by computer-generated sensory input such as sound, video, graphics or GPS data. It is related to a more general concept called mediated reality, in which a view of reality is modified (possibly even diminished rather than augmented) by a computer. As a result, the technology functions by enhancing one’s current perception of reality.”

If that is a little too technical, Augmented Reality is a way of using a picture, known as a trigger image, to generate a video, slideshow or computer generated graphic. It seems that technology moving forward will be using a lot of AR and here is google’s next project proving the incredible potential with AR:

How can Augmented Reality be used in the classroom?

I am always looking for ways to inspire, motivate and engage children. Augmented Reality definitely provides the WOW factor in the classroom. The reaction of showing the a class some examples of AR was that of utter shock, amazement and complete awe. Children are fascinated to see how a picture they have drawn or made can transform into a video. They are perplexed by how it works and definitely enthralled by the sense of magic that AR provides.

Recently I have been doing a lot of literacy work with a group of Year 5 based on the app “Epic Citadel,” this is a wonderful free app that allows the children to navigate around a dynamic fantasy setting which is the backdrop to the game Infinity Blade. Without characters and storyline, the app lends itself to the classroom as it provides the setting but allows children to use their imagination to add characters and a story line.

To begin with I wanted to let the children roam the app and generate descriptive language and make a word cloud that can be then referred to later for more writing. – See the word clouds made by the class.

The next lesson I used slow writing to help the children write an introduction to the setting of Epic Citadel. But I didn’t just want it to be written in their books I wanted to bring their writing alive. I decided to use Aurasma to make this happen.

FIRSTLY THE CHILDREN NEEDED TO MAKE AN OVERLAY – THE ANIMATION/VIDEO THAT WILL PLAY ONCE A TRIGGER IMAGE HAS BEEN SCANNED. SO ONCE THE CHILDREN HAD COMPLETED THEIR WRITING, THEY NARRATED IT OVER SOME SCREENSHOTS OF THE APP TO CREATE A SHORT VIDEO USING IMOVIE. CHILDREN OPENED THE EPIC CITADEL APP AND USED THE HOME AND LOCK BUTTON TO TAKE SCREENSHOTS OF DIFFERENT SCENERY AND THEN RECORDED THEMSELVES READING THEIR WRITING. ONCE THEY HAD EXPORTED THIS IS WAS TIME TO BRING THEIR VIDEO TO LIFE USING AUGMENTED REALITY!
USING AURASMA, CHILDREN CAN UPLOAD THEIR OVERLAY – (THEIR IMOVIE NARRATIONS) AND THEN CHOOSE A TRIGGER IMAGE – WE USED THE CHILDREN’S WORD CLOUDS FROM THE LAST LESSON. THE CHILDREN WERE ENTHRALLED TO SEE THEIR WRITING COME TO LIFE WHEN THEY SCANNED THEIR PICTURE WITH THE APP. THE AURASMA APP ALLOWS YOU TO CREATE AURAS AND SCAN OTHERS, BUT YOU CAN ALSO SIGN UP FOR AURASMA STUDIO SO THAT YOU CAN MAKE AURAS ON YOUR LAPTOP OR PC. TO SEE THE CHILDREN’S EXAMPLES PLEASE FOLLOW THE FOLLOWING STEPS:

Using Augmented Reality in the Classroom from Davyhulme Primary School on Vimeo.

I was asked that when I work with Year 6 on a Thursday could I use the iPads to help the children prepare for the controversial SPAG test. I found a few apps to use which the children really enjoyed but the biggest reaction was when I used Augmented Reality for the children to demonstrate their understanding of using different punctuation marks – you can see the lesson and examples here. I am planning something very similar next week with the other Year 6 class but focusing on different word types – Nouns, Verbs etc.

Aurasma is definitely an app with lots of potential. I am truly excited by the prospect of using this app right through the curriculum and in different Key Stages.
Some other ideas I have had are:

Here is an interesting video about how a school have been using Augemented Reality through Aurasma:
http://youtu.be/5qRcIek4NY0

Aurasma is definitely a great app for generating, sharing and scanning examples of AR, however there are other Augmented Reality apps that can really spark some creativity in the classroom.

String – This app provides a teacher with some awesome Augmented Reality that would be perfect as a stimulus in Literacy.
The app has four different trigger images that generate some superb examples of Augmented Reality such as:

The Year 3 class at my current school are using Space as their topic this term. Last lesson I used a fotobooth to turn themselves into Aliens – See the lesson here. The Alien from the String app would be perfect to inspire some writing to describe an alien that landed in our class. The almost magical aspect to Augmented Reality really fascinates the children. The same idea could be used for the Dragon image or even use it to inspire some art work. The trainer that can be designed by the children could be a fantastic stimulus for persuasive writing. See the examples in this video: