Having been introduced to Hattie’s work on ‘effect sizes’ in the learning environment last year (http://www.learningandteaching.info/teaching/what_works.htm), I took it upon myself to investigate advanced organisers in my own practice. This is said to have an average effect size of 0.37, which in comparison to other methods is reasonably small. However, I opted to focus on the use of analogies and metaphors within my teaching practice, as personally I believe comprehension to be greater if a new subject is related to a familiar subject. Of course, many of us will naturally do this without a second thought, but I intended to consciously approach sessions with the intention of overtly using this method.

One example of this practice quite recently was when teaching the flow of blood around the cardiovascular system to a group of level 2 BTEC learners. I introduced the topic by asking the group to share their thoughts on the process of going to the gym – this involved eating food to give you fuel (collecting oxygen from lungs), travelling to the gym and going through the changing rooms (left side of the heart), working out and ‘burning’ the fuel (feeding the muscles with oxygen), travel back through the changing rooms (right side of heart) before travelling home (the lungs) to start the process again. Obviously when doing this, I did illustrate on the white board. I then made reference to the fact that the gym process is similar to the flow of blood…Following this, I gave the learners the opportunity to create their own analogies of the process. Working in groups they created some amazing ideas such as the process of topping up and using a mobile phone, travelling through the petrol station to name a few.

For the learners, this particular process taught alone can be very challenging, yet now they have their own analogies for the process, they are able to demonstrate a far greater understanding.

Any comments would be greatly appreciated!

Yesterday I was working with my students on figure drawing using colour. Most of the work we’ve done until now has been using the usual monochromatic media of charcoal, inks, conte crayon etc. so introducing colour is always a bit of a challenge.

How often have you really looked at the colour of your own skin close up? Take a wee look now, what do you notice? Of course, it’s not just one colour it’s a variation of colours and it’s not just pink I shouldn’t imagine. What you’re seeing is the transparency of the skin and blood vessels and veins that slow beneath the surface. Equally if you are black, white or Asian, you will see variations in skin tone and colour.

If you’re white you will see anything from pinks, ivories, creams, blues, yellows and purples. It also depends on how warm you are, if you’ve been exercising, how much sun you’ve been exposed to over your life and your general health and wellbeing. Looking at the figure from a further distance, 2 or 3 meters for example as it typical in the life drawing room, the changes in colour and tone correspond to the lighting, shadows and reflected light.

So how can we use these observations and knowledge when we’re drawing the figure?

Well, 2 artists that you’d be crazy not to look at are Jenny Saville and of course the master of figure painting, Lucian Freud. (below) Due to time restraints and student experience we have mainly worked with coloured pastels as we only have sessions that last 1hour 45 minutes. If you have more time and are more experienced I would suggest using paints, either watercolours or acrylics and a set of large-ish brushes.

When considering the approach to your life drawing/painting you’ll need to think about whether you want to make your work closely linked to the colours that you’re seeing or to work more freely in a creative sense. In the works of Jenny Saville and Lucian Freud the colours are exaggerated and simplified somewhat, however, this allows us to observe more keenly. Basically we’re looking for neutral colours with hints of these colours that we mentioned earlier; pinks, ivories, creams, blues, yellows and purples that flow from one to another.

Introducing colour in a really simple way by working on coloured paper can be helpful. As is remembering that we’re not only thinking about colour but also tone. It’s worth spending a little time just looking at the model to begin with and making some observations of colour, tone and relation to shadows, highlights and mid tones. Don’t get too bogged down in mixing lots of paint to tackle each colour.

By taking a look at the colour mixes below you should be able to start mixing some basic colours that correspond to the areas of colour and tone that you are seeing. Remember to think also in terms of warm areas and cooler areas in context of light and shadow. 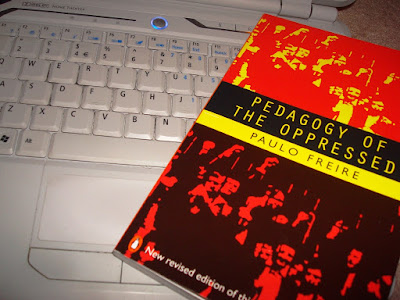 Over the last few weeks, I have been creating a series of films for Scottish Book Trust around emerging technologies for teaching and learning. Although unable to attend, or contribute to, the recent #edupic11 discussions, I hope the films below will add something to the debate: how to engage teachers in the creative uses of technologies in their every day teaching practice. The films are designed to give confidence, the sine qua non of any education revolution. The deeper the engagement, the more profound the change. I hope the Pedagoo community will appreciate having these films together in one place here. They can also be found on Vimeo and on YouTube.

Wallwisher – a great way to bring together learning content from Scottish Book Trust on Vimeo.

How to use Prezi, an exciting presentation tool! from Scottish Book Trust on Vimeo.

Elizabeth McGillivray shares how she gets her pupils enthused in Science at TeachMeet Lothians & Borders…inspiring stuff!

Thanks to the Scottish Book Trust for arranging and sharing the filming at TeachMeet Lothians & Borders.